An interactive installation, Tablet (Android)
Student project made in less than a week

The unique interaction between the public and the project was to scratch a layer of “dirt” on the screen and discover a full mural painting. The player can move on the mural painting by sliding his/her finger on the screen. The point was to build an environmental narration in cooperation with the 2 Graphic Artists.

Scheme of the different areas.

You are an archaeologist in the near future. The museum’s collections are open to you and you found this artifact, a tablet, in a wood box. Discover the hidden fate of this ancient nation…

The public has to scratch a « dirt layer » to discover an ancient mural painting. It was made during a visual design session. We were trying to make a landscape and an « untold story » with different expressions like « a hairs desert », « a screens mountain », etc. PreOrder was made in less than one week for a class work.

The experience was presented the tablet on a wood box made for the occasion, on a sort-of museum column. 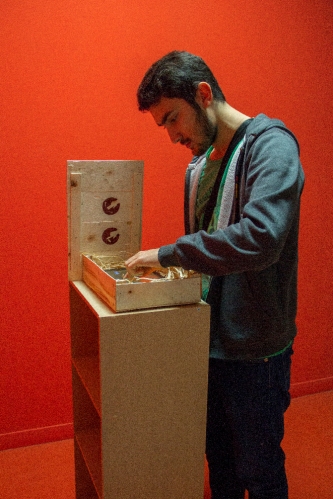 Player stands in front of the artifact to interact with, scratching the dirt layer.

Part of the painting you can discover.