I started this level to train my level design skills on UE4. The project is simple: a grayblock level with simple shapes, the first layout of lighting (guiding the player’s eyes) and some textures and materials to help to visualize the level. I draw different maps and layouts of the level I want to create, with the different paths and basic shapes for obstacles and walls. I build it step by step in Unreal Engine 4, starting with global volumes than adding main ways and architectural guidelines. I test my map multiple times to assure the different ways, objectives, and options are clear. Details and smaller blocks are added on this first base. Lighting is an essential tool to guide the player, I set some basic lights in the level.

Flow of the level

Key elements to guide the player 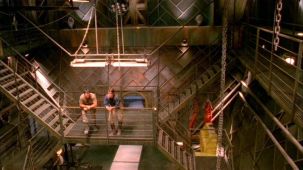 This map takes place in a fictional TPS sci-fi game. Those public baths are common into big cities and spaceport on the ground (planet or moon). The baths are generally built in the buildings’ basements. It’s a mix of rusty metallic architecture and big ponds of water. Clients can be humans and other alien races, installations are adapted to them. An old rocket engine is used to create the heat and the steam for the whole installation. Recycling part of ships is common in this universe. A garbage space lore. 🚀