Based on the tabletop RPG license Vampire: The Masquerade.

I participated in a series of interviews on the quest and level design aspects of the game and on the characters.

Vampire: The Masquerade – Swansong is a narrative-driven, single-player role-playing video game in which the player controls three vampires with different vampiric disciplines (abilities),switching between them over the course of the game. The player can customize the characters by choosing to upgrade their disciplines and character statistics to suit their preferred playstyle; this influences character interaction and skills used while exploring the game world, such as picking locks and hacking computer terminals. Throughout the game, the characters are put in difficult situations where the player has to make moral choices.

The story is set in Boston, in the World of Darkness, where vampires exist unbeknownst to humanity – the vampiric practice called the Masquerade, which is upheld by the vampire sect the Camarilla. There, the new Camarilla Prince Hazel Iversen is trying to strengthen the Camarilla’s presence by bringing Boston and Hartford together. The story follows three vampires from different vampire clans with differing views on the Camarilla’s rule, who investigate conspiracies in Boston following a shootout, starting with who ordered the attack and why.

LIGHT THE PAST, SEED THE PRESENT, BLOSSOM THE FUTURE.

In a world on the brink of perdition, the Moonycat, last-born and last of his kind, has to fight an invincible pandemic that threatens the world.

Aided in his quest by a heart of a star named LUX, the heroes will lift te veil of mystery that floats on the past of Metaphora and the disappearance of the Moonycats.

LUX will be the key to save METAPHORA and make the planet blossom again.

Play two characters, the MOONYCAT and LUX, that you can switch anytime, anywhere. With their different and complementary set skills and abilities, their cooperation is essential to complete quests and progress into the story.

Lead a journey into the unknown as you explore a dying planet and unravel the mysteries that floats on the past of METAPHORA and the disappearance of the MOONYCATS.

Control the GEOPODS with LUX

GEOPODS compose the fauna of METAPHORA. These crazy little creatures, obsessed with seeds, will help you to solve puzzles and fight the DARKSEED.

Save the world from the pandemic 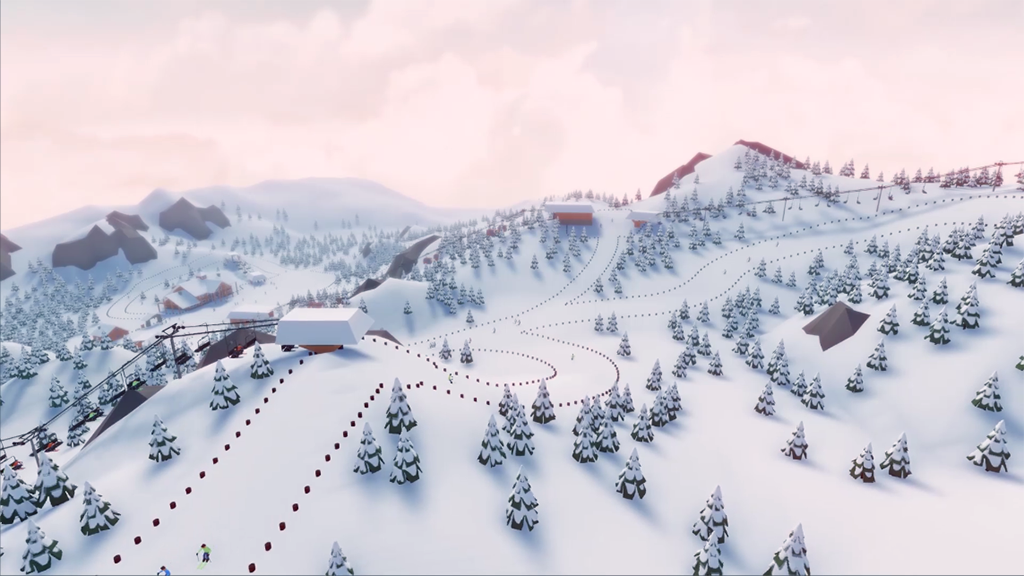 Build ski runs and lifts, improve the resort and manage the workforce to attract ski lovers of all kind. Will you create a charming village or concrete blocks? That’s up to you!

The success of your station relies on the well-being of visitors. Choose wisely the ones you want to attract and keep them happy!

Surrounded by stunning landscapes, take a break and enjoy the view. Snowtopia is a feelgood game that immerses you in a wintry and cheerful spirit.

This is a work in progress.

I’ve wanted to train the Far Cry 5 editor which is a great tool for Level Design and script training. I’ve started to write the main goals and places of interest in the level. After that, I begin to draw different maps and layouts. How many different paths for the player? How to reward exploration and stealth? Then I jump into the editor to test a few things, starting with the global shape of the island. I draw the main roads/pathways, put the major volumes and obstacles and test it. If it’s too long, I reshape the island.  After the global shapes are done, I work section by section. The spawn point is at the top north of the island so I place 2 basics knives and a health pack for the player (Player starts the level without any weapon). I tested different positions and orientations for the first enemy encounter to allow the player to kill him easily but yet keep this dangerous/stormy/stressful atmosphere. Once this first section is done, I move to the next one. At each step I test the full level: how does it work between sections? Is it too long? Did the player can constantly know where to go?
I run some tests with the wanted weather (stormy and foggy) to check on visibility and objectives.

STORM MAY BE OVER…HOPE PRINCETON, BC

I started this level to train my level design skills on UE4. The project is simple: a grayblock level with simple shapes, the first layout of lighting (guiding the player’s eyes) and some textures and materials to help to visualize the level. I draw different maps and layouts of the level I want to create, with the different paths and basic shapes for obstacles and walls. I build it step by step in Unreal Engine 4, starting with global volumes than adding main ways and architectural guidelines. I test my map multiple times to assure the different ways, objectives, and options are clear. Details and smaller blocks are added on this first base. Lighting is an essential tool to guide the player, I set some basic lights in the level.

Flow of the level

Key elements to guide the player

This map takes place in a fictional TPS sci-fi game. Those public baths are common into big cities and spaceport on the ground (planet or moon). The baths are generally built in the buildings’ basements. It’s a mix of rusty metallic architecture and big ponds of water. Clients can be humans and other alien races, installations are adapted to them. An old rocket engine is used to create the heat and the steam for the whole installation. Recycling part of ships is common in this universe. A garbage space lore. 🚀

I worked on 2 main projects for Smart Tale and write several game concepts and concept iterations for the studio. I was the main Game Designer of Smart Tale and in charge of managing the 2D Graphist and the main prototype development with two other developers. Both of the projects were on the pre-production/concept period.

Some examples of the mockups I made for Smart Tale

Some of the narrative contents I made for Smart Tale

Some examples of the documents I made for Smart Tale

Some documents are blurred out of respect for the studio and the concerned people.

Some examples of the mockups I made for GCU2

Some examples of the flowcharts I made for GCU2

This new entry to the series will have you racing along on more than 1800 miles (almost 3000km) of roads on mountainsides, through nature parks, in the middle of the desert, and along the coast. Featuring more than 250 races, including championships, missions and challenges, the game will allow to go behind the wheel of more than 50 licensed cars from the world’s most famous manufacturers, such as the Porsche 718 Boxster, 918 Spyder, 911 GT2RS, Dodge Viper, Lotus 3-Eleven or McLaren 720s.

I was the only Game Designer fully assigned to this project. I’ve participated in several meetings with producers and potential publishers, including a full presentation of the concept to a Millenial Esports team, visiting the French studio.

Some examples of the mockups I made for this project

Some examples of the flowcharts I made for this project

I came on this project with a double role, Level and Narrative Designer. On the first week, I set a “typical Kaiju Snap experience” model with a storyboard and some key points presentation. With the basic ideas given with the pitch, I structure those elements on a first scenario and keys elements for the game experience.
Starting there, I worked in collaboration with the Game Designer of the project on the creation of a vertical slice, representative of our game. I used excel tabs (challenges and elements repartition), maps with multiples layers and legends, powerpoint/google slide presentations, storyboard, design posters (One Page Design) and rough Unreal scenes (greybox/blockout). I mixed Rational Level Design with a more systemic approach of the world and level building. I also designed some guidelines for our episodic model and wrote summaries of scenario and gameplay elements of the following episodes.

A rough map of the vertical slice I draw. to have a general idea of the level layout, the Kaiju and the drone paths.

Blockout I made for our vertical slice, water levels, stream, and creature movement spline were added at the same time.

Blockout for a test scene (scales between the Kaiju and its environment, simple movement splines)

General map of the 1st island I draw to set the different places, with the path the player will follow during this episode.

Dialogs I wrote for this vertical slice.

One Page Design I made for this 1st episode.

A journalist duo sends a drone to an archipelago formerly used as a nuclear test site. Their goal is to find evidences of a unique environment to classify as world heritage. But they found a giant and totally unknown creature…

Kaiju snap is a solo game where you take control of a drone using your preferred VR headset and a game controller. You use the drone to take pictures of the fauna and flora. In this game you have a documentary approach to your objectives: you are here with a specific mission to fill, take pictures of a unique wildlife. We set the game on two important pillars: Marvel and Control. Our core gameplay is taking pictures of fauna and flora of the island while searching for some hints of the presence of a giant a mysterious beast. Those hints lead the player to specifics zones where he/she can encounter the creature and take photographies of it.